FISHERMEN MEKONG RIVER. South East Asia, Cambodia, Phnom Penh, Mekong River. The Cham fisher people live in various desolated villages along the banks of the Mekong and Tonle Sap rivers. The fisher families live like river gypsy nomads, working and living on their boats, sleeping under a sprung bamboo frame, all their worldly goods stored below deck. They live in extended families, with numerous boats, together for safety. Their diet is rice, vegetables and fish. Their sleek wooden boats are powered by petrol outboard motors with batteries or generators to supply lighting at night. Their fishing technique is laying nets twice or three times per day, which are weighted well below the surface, using old paint aerosal canisters as buoyant floaters, hanging just beneath the surface. These particular fisher families, living at the junction of the Mekong and Tonle Sap rivers, overlooked by Phnom Penh, sell their catch at the Vietnamese market, on the banks of the river. Their life and fortunes are controlled by the cycle of the river. As the river levels drop, so the quantity of fish decreases, until after the heavy floods of the monsoon they fill the river again. They are poor traditional Muslims, marginalised from mainstream society, living a third world life in the immmediate shadow of the first world. The Cham, originally a people of an ancient kingdom called Champa, are a small and disenfranchised community who were disinherited of their land. They are a socially important ethnic group in Cambodia, numbering close to 300,000. The Cham people, live in some 400 villages across Kampong Chnang and Kampong Cham provinces. Their religion is Muslim and their language belongs to the Malayo-Polynesian family. Their livelihoods are as diverse as rice farming, cattle trading, hunting and fishing.///A Cham fisherman with his rooster infront of his home on the banks of the Mekong 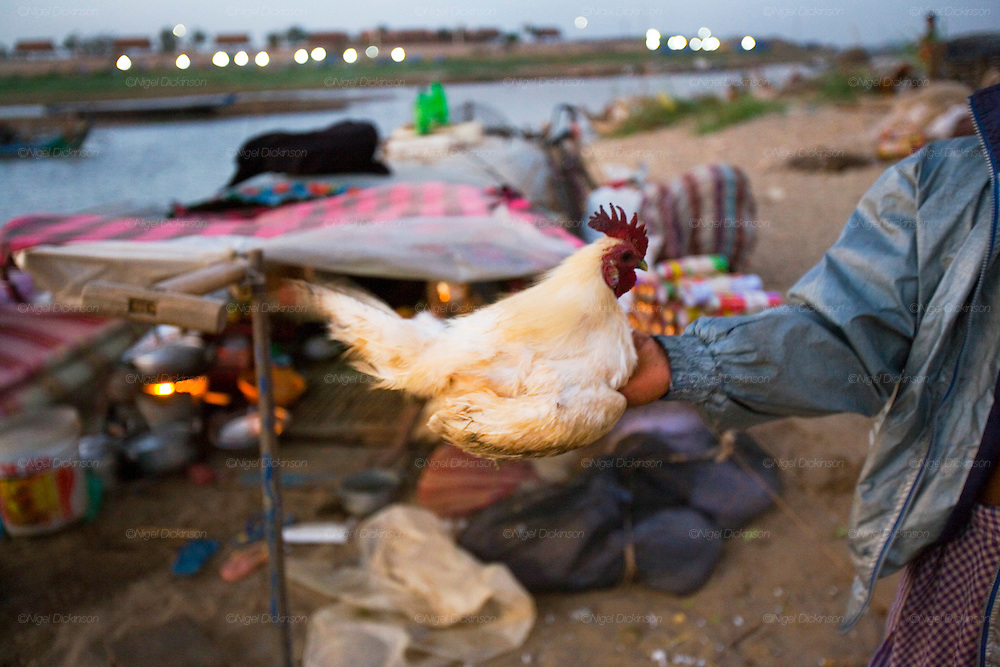